The Dentistry Sector Has Some of the Best Job Opportunities

The Dentistry Sector Has Some of the Best Job Opportunities

If you are about to head to a university and are leaning towards a healthcare position, you’re in luck. The unemployment rate for Millennials is high, and it’s not necessarily because jobs are scarce–one issue is that graduates expect to get the...

If you are about to head to a university and are leaning towards a healthcare position, you’re in luck. The unemployment rate for Millennials is high, and it’s not necessarily because jobs are scarce–one issue is that graduates expect to get the best jobs out there instead of entry-level jobs. Rasmussen College says that there are many entry-level healthcare jobs that pay really well for those just starting out–and the news is even better: employers want to fill these kinds of positions ASAP!

If you plan on extending your education past a bachelor’s degree, you may want to look for a job in the dentistry sector. ADA.org says that dentists, oral/maxillofacial surgeons, and orthodontists all ranked highly for some of the best jobs of 2017:

Dentists scored an overall score of 8.2; orthodontists, 8.1; and oral and maxillofacial surgeon, 7.7.

“The Bureau of Labor Statistics predicts employment growth of 18 percent between 2014 and 2024, with 23,300 new openings,” according to the U.S. News & World Report. “A comfortable salary, low unemployment rate and agreeable work-life balance boost dentist to a top position on our list of best jobs.” 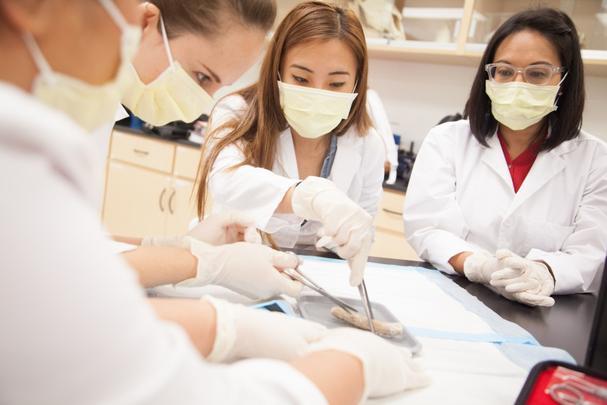 But if you don’t want to extend your schooling, could you still get a good job in the dentistry sector. The answer is yes! Although dental therapy is an up-and-coming position that isn’t quite as common in the U.S. as in other countries, an article at Dr. Bicuspid says that many Americans would be happy to see this midlevel provider:

Americans overwhelmingly support the concept of dental therapists, according to the results of a recent phone survey. Interviewers asked thousands of registered U.S. voters if they would like a new type of midlevel provider similar to a nurse practitioner, and 80% of respondents said yes.

Critics are concerned that dental therapists will not provide the same standard of care as a dentist. They also tend to be skeptical that therapists can increase access to dental care or reduce costs.

Meanwhile, proponents of midlevel providers point to evidence that dental therapists effectively reduce untreated caries, not only in the few U.S. states that have approved their use but also abroad. In addition, support for midlevel providers appears to be gaining momentum.

Dental therapy is a great route because you’d be able to offer your services to those who in the past would have to opt-out of dental care. Dental therapists are highly trained to perform preventative and pediatric dentistry procedures under the guidance of a dentist.