Nail-Biters May Need Antibiotics More Often Than Other Dental Patients

Nail-Biters May Need Antibiotics More Often Than Other Dental Patients

While chronic nail-biters may dislike their habit because it ruins their nails’ appearance, the problem actually runs deeper. According to an article at Drbicuspid.com, people who bite their nails increase the number of bacteria in their mouth!

While chronic nail-biters may dislike their habit because it ruins their nails’ appearance, the problem actually runs deeper. According to an article at Drbicuspid.com, people who bite their nails increase the number of bacteria in their mouth! And if these people accidentally scratch their gum tissue with broken nails, then this bacteria can easily spread throughout the body. Take a look:

How can you help patients who bite their nails?

Onychophagia, as we know it, may provide temporary comfort to patients when they feel stressed, nervous, or bored, but the habit does a lot more damage than they know. As their dentists, we need to help them stop biting their nails. Here are a few instances of nail-biting gone bad that we can share with our patients to convince them to stop.

We have to help our patients understand that anytime they use their hands, they risk being exposed to different kinds of bacteria. Even when they wash with soap, some of those germs will remain underneath the fingernails. Biting their nails inevitably passes the germs from their hands to their teeth, tongue, and gums, leading to the spread of bacteria in the mouth.

A study published in the Journal of Oral and Maxillofacial Pathology (May 2013, Vol. 17:2, pp. 163-168) found that individuals with nail-biting habits had a higher carriage of Enterobacteriaceae than those who didn’t bit their nails. The findings tell us that nail-biting paves the way for the growth of bacteria, which can affect patients’ teeth. In addition, nail-biting also promotes digestive problems when people ingest bits of their fingernails and the bacteria thriving on them . 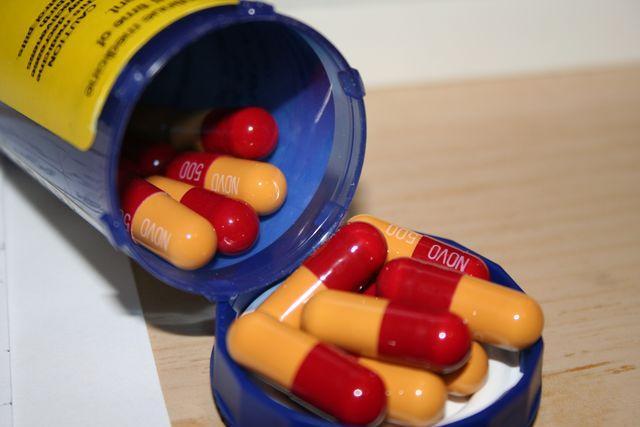 Nail-biters may not realize this is a problem unless they think back on their medical history. Because nail-biters inadvertently spread bacteria in their oral cavity, they may get sick more often and need antibacterial drugs more often. While antibiotics do a great job at healing the body of bad bacteria, long-term usage is not good. These drugs can reduce the number of good bacteria in your GI tract, which can lower your immune system.

Instead, one site says that you should focus on maintaining your good bacteria with prebiotics and probiotics:

Probiotics aid oral health: When the goal is to reduce antibiotics

The Centers for Disease Control and Prevention es­timate that up to 50% of antibiotics are unnecessary or inappropriately prescribed.(3) From 1996 to 2013, dental prescribing increased by 62.2%, and its proportionate contribution increased from 6.7% to 11.3% of all antibiotic prescriptions. The rate of prescribing increased most for dental patients aged 60 years or older, in regard to:

It is advisable that antibiotic prescribing should be reviewed regularly to make sure that they are compliant with the most recent evidence-based guidelines. In addition, with all antibiotics, it is important to take probiotics along with them in order to replenish the good bacteria that may have been killed off during the treatment with antibiotics.

Researchers have discovered that probiotics create a film in the mouth that acts as a protective sheath for oral tissues and prevents diseases connected with gums and teeth. The space used by bad bacteria is occupied by probiotics, which thus restricts the multiplication of these bacteria. Consequently, the bad bacteria are replaced by good bacteria, which prevent contributions to oral health problems.

From cavities to bad breath and periodontitis, all of your oral problems have their roots with undesirable bacteria building up in your oral cavity. By introducing good bacteria in the mouth through probiotic supplements, the amount of harmful bacteria is significantly reduced, which improves the health of the mouth environment.

Probiotic products are considered an element of a healthy life. Oral administration of probiotics is safe and effective and may reduce the need for antibiotics. There’s no recommended daily dose of probiotics, but research suggests aiming for 1 billion to 10 billion live bacteria cultures (measured in Colony Forming Units, or CFUs). Since bacteria counts are rarely found on food labels, focus instead on eating a serving of probiotic-rich food every day.

Along with incorporating prebiotics and probiotics into your diet, nail-biters should talk with their dentists about strategies to break the habit.