Is Vaping Bad for Your Teeth?

Is Vaping Bad for Your Teeth?

Smoking cigarettes has been steadily on the decline in recent years. As of 2017, 14% of adults over the age of 18 have smoked. This is down from 15.5% the year before. One reason smoking is on the decline is from e-cigarettes, also known as vaping.

Smoking cigarettes has been steadily on the decline in recent years. As of 2017, 14% of adults over the age of 18 have smoked. This is down from 15.5% the year before. One reason smoking is on the decline is from e-cigarettes, also known as vaping.

Vaping replaces cigarettes, allowing the user to inhale water vapor versus the harmful smoke-filled, potentially damaging chemicals and particles. Depending on the device used, the simulated effect of vaping is a lot like smoking and makes it much easier for cigarette users to quit.

In this article, we’ll go over what vaping is and if it’s terrible for your teeth. We’ll also touch on what effects if any, vaping will play on your oral health. 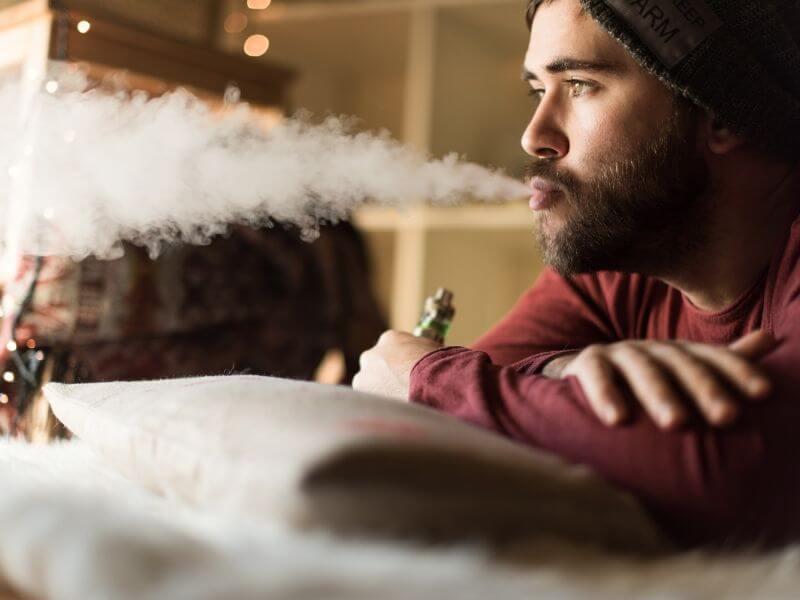 E-cigarettes have grown extremely popular in recent years. They have come under fire too. Vaping is the process of inhaling an aerosol mixed with liquid creating a ‘ vapor smoke.’ E-cigs started back in 1927, but what we know as modern e-cigs didn’t come around and were readily available in the early 2000s. Invented by Hon Lik in 2003, e-cigarettes have evolved to be a $2.5 billion a year industry.

Are there any real differences between smoking and vaping? Absolutely. For anyone that has been a long-time smoker can tell you that the impact of vaping is far different. Vaping doesn’t cause bouts of coughing. It doesn’t weigh heavily on the lungs like cigarettes do, where you would wake up with a smoker’s cough. There are plenty of positives.

One turn-on for vaping versus smoking is that vaping is significantly cheaper. Packs of cigarettes are always on the rise and are being taxed substantially more than they used to.

E-cigarettes typically have two parts, the battery (bottom) the canister (top). The cartridge contains e-liquid, which can contain nicotine and vary in flavors. Vaping works very similarly to smoking cigarettes. Instead of lighting up with a lighter, you’ll press a button to activate the battery that will heat the e-liquid, which will be converted to vapor when puffed. Unlike cigarettes that are done, once you get to the butt, e-cigarettes are reusable. You will still get the portable nicotine-delivery system like a cigarette because you’ll need to charge the battery.

Why do people vape?

Vaping can be a way for people to socialize. It can also be a vehicle for quitting smoking. No matter the reason for vaping, it is better than picking up a traditional tobacco cigarette. It’s estimated that 3.2% of adults are e-cigarette users, and many are former smokers. Though vaping is also on a decline, many still start in hopes of quitting cigarettes or trying something new. 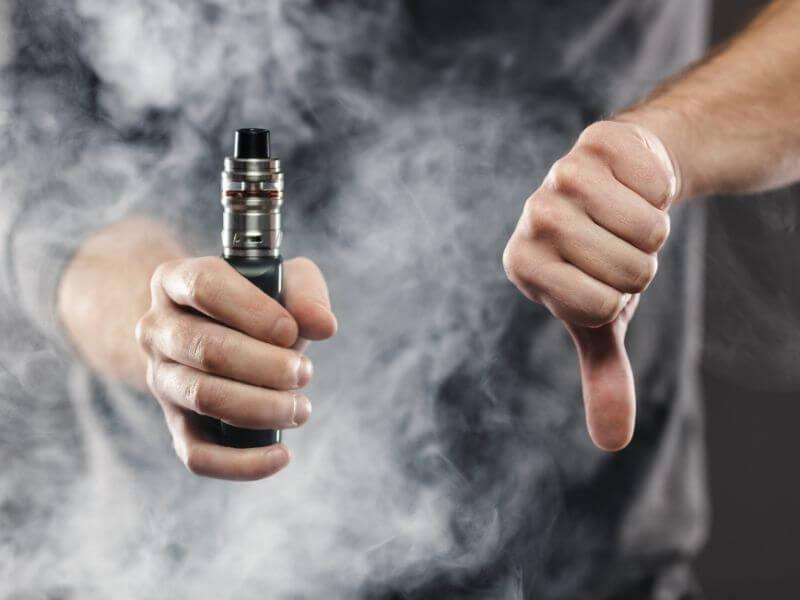 Is vaping bad for your teeth?

There have been some studies that suggest that vaping is bad for your teeth. Though they aren’t as harmful as cigarettes, there is still cause for concern as they do use the same actions as smoking. You will be inhaling, which causes dry mouth, which leads to an increase in bacteria. Any increase in bacteria will create a more prevalent situation where tooth decay can occur.

In addition to tooth decay, vaping could cause periodontal disease. Vaping has been linked to gum inflammation, which, when left untreated, can move under the gum and turn to periodontal disease. Cell death and changes in the living cells in the mouth are among the top concerns from vaping, which negatively affect a user’s oral health.

There are many studies done on oral health and vaping. However, there are not as many as there have been on the topic of smoking and oral health. In 2018, a study showed that vaping has less effect on teeth and gums than traditional cigarettes. However, there was limited research. Maintaining good oral health starts with seeing your dentist.

Image Dental provides a wide range of oral health care services to keep teeth and gums in optimal condition. For those that are vaping, you must continue getting cleanings and exams every 6 months.

Effects of vaping on oral health

It still isn’t known how much effect vaping has on teeth and gums. But we do know that vaping can cause dry mouth, excessive bacteria production, and increased gum inflammation.

Quitting smoking and vaping is the best thing you can do for your oral health. Though you won’t have yellowing of the teeth like with tobacco products, there are many great reasons, including improved respiratory responses.

Vaping may be the best choice for smokers looking to quit harmful cigarettes. It poses fewer potential risks than cigarettes and can be up to 95% less harmful. When it comes to your oral health and vaping, you’re doing better for your smile too. However, there are a few instances where vaping can affect your oral health, including excessive bacteria and dry mouth. These things can lead to gum disease and tooth decay.

It is crucial that if you are an e-smoker that you visit your dentist regularly for checkups and cleanings. These services can help promote a healthier smile, eliminate excessive bacteria, and actively stop progressive tooth decay. Schedule your visit with Image Dental today by visiting us online by clicking here or give our office a call at (209) 955-1500.